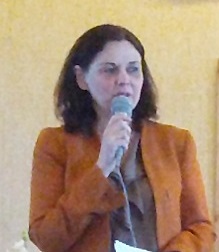 You could call my home a typical middle class home in the end of the 60´s and in the beginning of the 70’s. My father was working quite a lot at that time and had his heart set on AGA (a gas company), where he was working as an HR consultant on Lidingö near Stockholm. He was kind but quite an absent father. My mother was a nurse and me and my one year younger brother were two of the few kids in our neighborhood, who had a working mom.

We only went to Church on special occasions. My grandmother and one of my moms’ sisters belonged to the Salvation Army in southern Sweden. Sometimes, when I was a little girl, we were with them at the marketplace singing while my grandmother was playing the guitar.

I also learned to pray as a little child and our mother even prayed evening prayer with us. I even went to a Sunday school for a short while there where we lived, outside of Stockholm. But on one occasion the Sunday school people accidentally locked me inside the house, so that I couldn’t get out and after that I never went back to Sunday school.

When I was 14 and my brother 13, our father died suddenly from a heart attack.

After that, our mother turned inwards in her grief, so us kids had to take care of ourselves. I soon started to smoke, I also decided that I didn’t believe in God and revolted against most of what my mother had taught me. Quite soon I got anorexia, anxiety and a strong inner hopelessness. This filled my life and it meant that I had to occupy myself with something all the time. I was seized with death-wishes and started to write dark novels and one of them was even published in a school magazine.

I become a mother when I was 17 years old. When I called to God for a childbirth-related injury, He healed me. Now my eyes were opened to God, but I didn’t turn to Him in repentance.

When I was 21 I had an ectopic pregnancy. When I had gone a week over the calculated time, the fallopian tube had started to burst and I had begun to bleed into the abdomen. I had a life crisis. I realized that I could have died. I also could feel evil in the room where I was sleeping. I could wake up from my sleep fighting against something I couldn’t see. Then I surrendered. I realized that I couldn’t manage my life without God.

I asked Jesus; “How do I do this, How do I know what to believe? There are so many religions.”

I bought my first Bible and started to visit different Churches praying that I would feel the presence of Jesus. I had also prayed for an another child, which was not so likely with only one fallopian tube functioning, but I had a daughter in 1982.

I started to pray to God when I was 21 years old and one time two years later when I was laying in my bed, I felt God's power for the first time. An enormous power came over me and I was little bit afraid of that. Eventually I found Södermalmskyrkan and was baptized by pastor Bror Spetz, who is already with the Lord.

Since I came to Jesus and accepted Him as my Lord, my anguish disappeared. I can tell you that I‘ve never felt alone since Jesus came into my life. I’ve gone thru several phases’ with the Lord, both “first-love” and “wilderness”. The cleansing process is constant. Jesus wants my whole heart.

I studied to become a journalist after I got saved and have been working in media as a manager in different levels until now. At this time I feel that the Lord has called me to resign from my job and start a Church (congregation). Nothing in this world is worth anything without Jesus, nor am I worth anything without Him. Without Him I’m nothing, but with Jesus I’m everything. To Him belongs the glory for all eternity. I wish from my heart that everyone would accept the sacrifice Jesus has made for us human beings, He loves us so much.

People who live their lives without Jesus, are slaves under sin and are living in darkness, but we cannot recognize it until our Lord opens our eyes and makes us free. “Therefore if the Son makes you free, you shall be free indeed” (John 8:36).